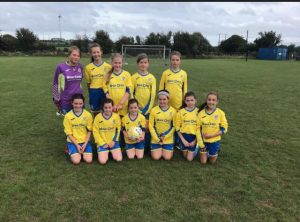 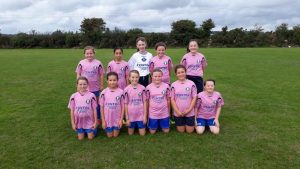 ‘Carrigaline Hibs too strong for Blarney’

Carrigaline Hibs overcame the challenge of Blarney in the CWSSL U12 Div 2 encounter at Shanbally last weekend in the first round of U12 games in the new season, scoring four goals without reply with Anna Higgins netting a hat trick.

Although this was the first game of the season for both teams, it was a welcome return for Blarney who have come back into the CWSSL and put in a very creditable performance despite their lack of competitive matches over the past couple of years.

Carrigaline started the game well, Anna Higgins’s effort going just wide of the posts in only the 2nd minute followed by Jessica Grace’s effort which was saved well by the Katie O’Brien in the Blarney goal as they looked for an early score.

Their first goal came in just five minutes when Anna Higgins broke through the Blarney defence and slammed the ball home giving O’Brien no chance.

Blarney started to play with a little more confidence despite being a goal down and started to move up field but were up against a very strong Carrigaline Hibs defence who cleared the danger at every opportunity.

The home side doubled their lead in the 26th minute when Rebecca O’Callaghan made no mistake on the far side from 12 yards and were looking very comfortable at the break leading 2-0.

Two minutes after the restart Carrigaline Hibs made it 3-0 as Anna Higgins met Sophie O’Callaghan’s cross and made no mistake from close range.

Three minutes later in the 35th minute, Anna Higgins got her third of the game and Carrigaline Hibs fourth when she proved to be too strong for the Blarney defence and drove the ball home from close range

The tempo dropped as the players fought to play against a stiff wind as the visitors attempted to put a brave face in trying to keep the score down and did well against the Carrigaline Hibs forwards who came forward in numbers throughout the remainder of the game.

Chances came and went for Carrigaline even having an effort cleared off the line and another goal disallowed, but they proved to be just too strong for Blarney who can only learn from their first league outing and will no doubt improve and gain confidence with each passing week.