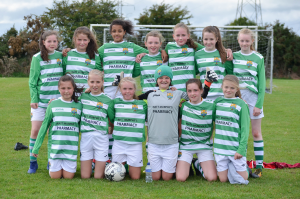 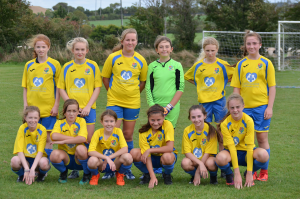 Macroom surprised last year’s runners up Carrigaline in the U12 Premier division season opener and claim a narrow 1-0 win and more importantly three points on the board at Shanbally last Saturday afternoon.

Last season’s Division 1 champions, playing their first game in the Premier league, were determined to make an impression in the league following their promotion and put up an excellent display against Carrigaline who wondered just how they let this game slip.

It was the home side who had the first chance on goal in the fifth minute when Heidi Mackin’s long range free kick was well caught by the Molly Murphy in the Macroom goal. A minute later the ball bobbled around in the Macroom area following a corner and it took some time for the defence to clear the danger as Carrigaline were looking for an early score.

Two chances fell to Mackin in as many minutes in the 10th and 11th minutes, one which went wide and the other saved by Murphy who did well to tip another corner kick onto the crossbar as the visitors were soaking up the pressure with another chance falling to Mackin who stormed through the middle only to see her effort go inches wide.

Macroom attempted to come forward, their best chance falling to Caoimhe O’Brien in the 25th minute whose effort went just wide of the posts.

Macroom keeper Murphy had to be sharp to gather the ball just in front of the line from Emily Wafer’s effort on the stroke of half time as both teams went in scoreless.

The tempo slowed somewhat in the second half as the players tired and attempted to play with a stiff wind which blew across the pitch making crossing and long passes very difficult for them. Macroom came more into the game in the second half, Avril Manning forcing a good save from Emma Doyle who had to dive at her feet as the visitors were gaining confidence in midfield.

The breakthrough came in the 52nd minute when Leah McMahon drove down the right, turned into a shooting position and blasted the ball into the far corner from just inside the area to give the visitors the lead.

The goal spurred the home side on and they almost equalised moments later, Katie Hurley’s shot at the near post well saved by Macroom’s Molly Murphy.

The game upped considerably in the closing minutes as Macroom were hanging on to their slender lead while Carrigaline attempted to get an equaliser, but the best chance fell to Macroom’s Ciara Kelleher whose shot was well saved by Doyle who did well to prevent her coming through again moments later as the visitors claimed their first Premier league win of the season.